There are many stories of people dying after eating a plate of eels. Sometimes their deaths were an accident, and sometimes the result of foul play. Probably the most famous eel-related death came in 1135, when King Henry I of England famously died after eating what the chronicler Henry of Huntingdon described as a dinner of carnes murenarum – the flesh of eels. The king’s doctors had advised against him eating eels, but Henry didn’t care.[1] The traditional interpretation of this story has been that Henry died from eating a surfeit of lampreys.[2] But murena is a complicated word, and can mean eel, lamprey, or moray. Medieval writers frequently confused the terms…so much so that they eventually invented the word lampreda to help distinguish. So it’s entirely possible that  Henry died from eating too many forbidden eels. 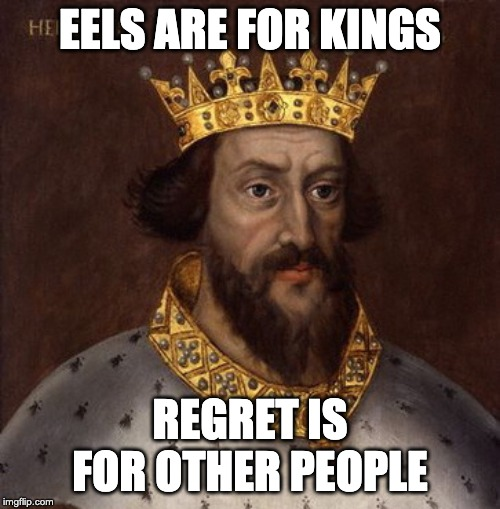 Henry I wouldn’t say “No” to eels until the eels said “No” to him.

Henry was not the only member of an English royal family reputed to have his death connected a dinner of murena. There is a story that Eustace IV (d. 1153), the son of King Stephen, choked to death on a plate of eels – a tale which suggests that Henry II owed his inheritance to not one, but two separate incidences of eel-related tragedy. It is, however, unlikely that Steven actually met his end this way. No account from the period attests to the story; the chroniclers of Steven’s day were quite silent about eels. The story first appears much later, unsourced, in twentieth-century historiography.[3]

Eels’ regicidal reputation was not limited to England, either. North of the border, the Scots had similar suspicions. Robert the Bruce’s physician, Maino de Maineri, wrote that the king consistently put his health at risk by eating “eels [murenae], which are by nature like lampreys [lampreda].” Maino complained that the king “risked many dangers” in eating eels because they were caught in “muddy and corrupt waters.”[4] 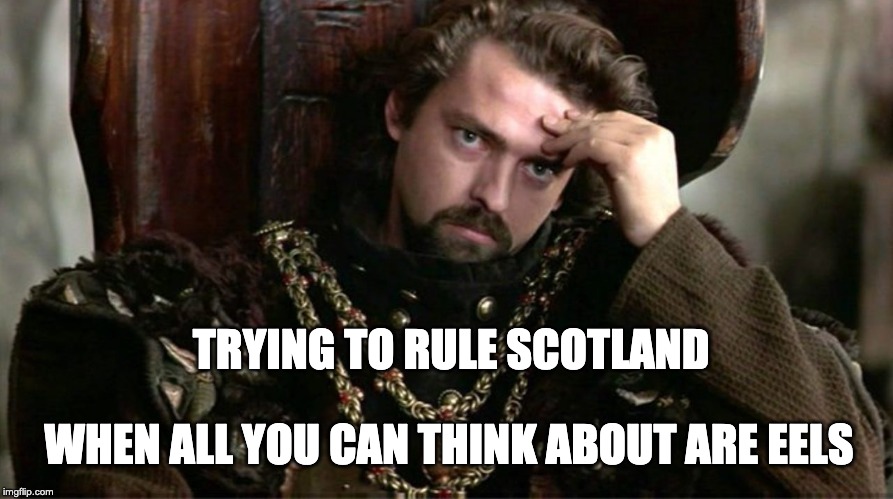 There was immediate precedent for concern: The Lanercost Chronicle records that the Scottish king Alexander III (d. 1286) had a diner of fresh eels (murena recenti) immediately before his own tragic death.[5] While the fish themselves were unrelated to the king’s death (he fell from his horse), the murena still seem prophetic in their role in the story.[6]

The chronicle tells us that during a feast Alexander sent a plate of the fish to one of his barons, urging the man to make merry because it was the Day of Judgement. To which the baron answered that, if it be Judgement Day, at least they would soon rise again with full bellies.[7] In the chronicle’s next line, the feast ends and the king rides off towards his fate (and presumed resurrection), prepared with a belly of murena.[8]

Eels didn’t just kill kings, either…plenty of regular English people met their end before a plate of eel. It turns out that eels were a popular dish to use for poisoning people. Everyone ate eels frequently, and the fish’s popularity (and strong fishy taste) made it a good choice if you were trying to kill with subtlety.

The fourteenth-century scholar and churchman Bartolemeus Anglicus (Bartholomew the Englishman), in his widely-read encyclopedia De Proprietatibus Rerum, relates in passing a story about a blind man man whose wife “gave him an adder with garlic in stead of an eel, that it might slay him.”[9] It didn’t work…the adder cured the man’s sight instead. In another, slightly later, version of this story the man, upon subsequently learning that he had unwittingly eaten a snake, immediately fell ill and died.[10] In both accounts, the couple’s unhappy marriage seems to have been sustained on a simple and regular diet of eels in garlic – which made it the perfect dish for killing your horrible husband.

Lord Randall, his hound, and his lady love, all sitting down to a plate of eels. (Arthur Rackham, 1919).

These two stories echo the traditional English border ballad “Lord Randall” (Child 12), in which the titular character’s lover (or mother, depending on the version of the poem) feeds him a poisoned meal of “eels fried in a pan.”[11] The dinner kills off both Lord Randall and his scrap-loving hound. Here again, we can see that a plate of eels was common enough to be an unsuspicious vehicle for murder.

All this is to say that, when your estranged partner surprises you with a bowl of eels, you may want to think twice before tucking in.

[6] The English chronicler at Lanercost, who never missed an opportunity to paint his northern neighbors as horrible, happily reports that Alexander fell from his horse after getting lost on a dark and stormy night while trying to make an assignation with his badly irreligious and unsuited bride-to-be. The Scots would come to see Alexander’s death as a tragedy, but the Lanercost scribe saw it as divine judgement for the king’s silly and reckless behavior. See: Stevenson, 116.

[8] A more focused study of eels in Scotland might do well to consider the title, Hey, MacMuraena!

[9] Bartholomaeus Anglicus, Batman Vppon Bartholome His Booke De Proprietatibus Rerum, Newly Corrected, Enlarged and Amended: With Such Additions as Are Requisite, Vnto Euery Seuerall Booke: Taken Foorth of the Most Approued Authors, the like Heretofore Not Translated in English. Profitable for All Estates, as Well for the Benefite of the Mind as the Bodie. 1582., ed. Stephen Batman, trans. John Trevisa (Ann Arbor, MI; Oxford: Text Creation Partnership, 2003), 114.

Uncategorized
Raw Eels May Kill Your Hangover. And the Rest of You, Too.
Christmas Careels: A New Holiday Tradition