Raw Eels May Kill Your Hangover. And the Rest of You, Too.

Have you ever woken up with a hangover after a hard night of partying, and thought to yourself, “What I really want right now is a good medieval remedy?” If so, then you probably turned to Google, or reached for a book on the topic, and learned that a serving of raw eels with bitter almonds was a traditional medieval English remedy.[1] But wait! Don’t grab that eel just yet. Nothing about this “remedy” is traditional, medieval, or curative. And trying it could kill you.

This Good Boy does NOT need raw eels. And neither do you.

As anyone in medieval England would have known, you should never eat raw eel. As it turns out, eel blood is toxic to mammals. In fact, it’s what Charles Richet used to prove the principle of anaphylaxis (a word of his own creation). He gave toxin derived from eel blood serum to dogs and recorded their decreased resistance to future, much smaller doses. His work on the subject won the 1913 Nobel Prize in Medicine. The toxin in eel blood breaks down when heated to 58-70º Celsius, so it’s easy enough to get rid of.[2] As people the world over known, cooked eels are fine. But raw ones are bad news.[3] 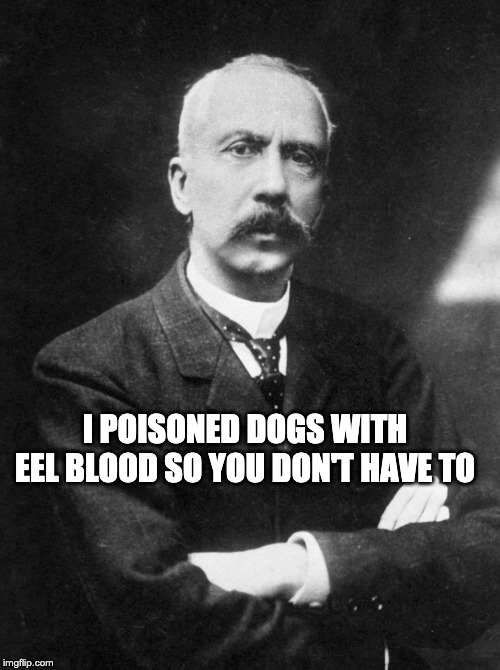 Interestingly, the connection between over-drinking and eels may have its roots as far back as the seventh century, when Isidore of Seville — that enormously influential early encyclopedist, cleric, and mansplainer — wrote that anyone who drinks alcohol in which an eel had been killed wills develop a strong distaste for the drink.[4] This piece of advice stuck with medieval writers, who repeated it, and it carried over into the Early Modern period as well. 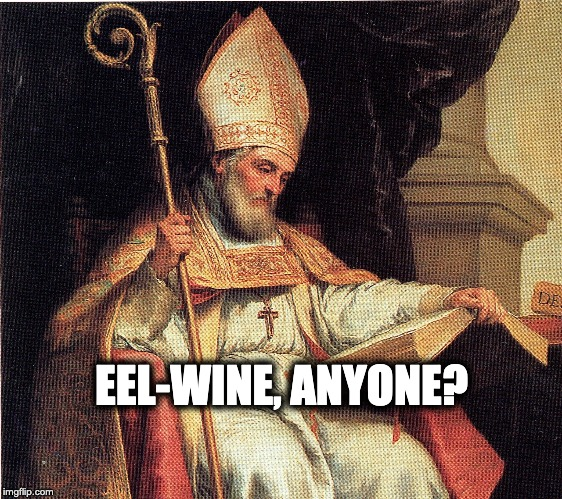 The seventeenth-century botanist and writer Nicholas Culpeper came back to the legend in his most famous work, the Complete Herbal. Culpeper wrote about eels’ virtue as a cure for alcoholism, writing that the fish, “being put into wine or beer, and suffered to die in it, he that drinks it will never endure that sort of liquor again.[5] Which makes a certain degree of visceral sense.

It seems likely that this is the history that informs the modern idea that raw eels and bitter almonds was a medieval hangover cure. But such a reading mistakes the sources, and doesn’t take the fish themselves into account. Now, the medieval English did occasionally poisoned each other with eels…but that’s another story for another article. When they weren’t feeling murderous, thought, they certainly knew better than to compound a hangover with a venomous chaser of raw eel. And now so do you!

[5] Nicholas Culpeper, Culpeper’s Complete Herbal,: To Which Is Now Added, Upwards of One Hundred Additional Herbs, with a Display of Their Medicinal and Occult Qualities ; Physically Applied to the Cure of All Disorders Incident to Mankind. To Which Is Now First Annexed His English Physician Englarged, and Key to Physic, with Rules for Compounding Medicine According to the True System of Nature. Forming a Complete Family Dispensatory, and Natural System of Physic to Which Is Added Upwards of Fifty Choice Receipts, Selected from the Author’s Last Legacy to His Wife (London: Richard Evans, 1816), 252.